The history of acrylic

Acrylic is much older than people usually think. And also, acrylic lasts longer than is usually expected!

Already in 1877, there was a report about the polymerization of an acrylic (methacrylate). Only 50 years later Herr Doctor Otto Röhm produced an acrylic sheet for the first time through polymerization in a way that made commercialization possible. The factory production was started in 1934 by the company Röhm & Haas, in Darmstadt (Germany), under the Plexiglas® brand.

The way in which acrylic is cast today has been developed by engineer I. Crawford from the company ICI, in the UK in 1935. The acrylic sheets were primarily used for lenses, windows, and covers in the first days. See a historical remake here:

Acrylic became a very important product in the Second World War. On the German side, planes and vehicles were equipped with Plexiglas® and on the English side with Perspex®. The end of the Second World War therefore also led to a major decline in the volume use of acrylic. Until that time, clear acrylic was by far the most important product. The development that was started now concerned other applications and therefore other designs, with colour and diffusion (opal). Applications were protective covers for street lighting, fluorescent lighting and also a lot of illuminated advertising bins. Acrylic was perfectly suited for this: hard to break, light in weight and very weather and aging resistant. Increasingly larger sizes of sheets and blocks were also being requested from the market for protection, roof panels, and furniture. In addition, new structures were developed, especially for the lighting industry. The laboratories of the producers also developed new variants by adding additives. For example,adding latex made impact-resistant acrylic. 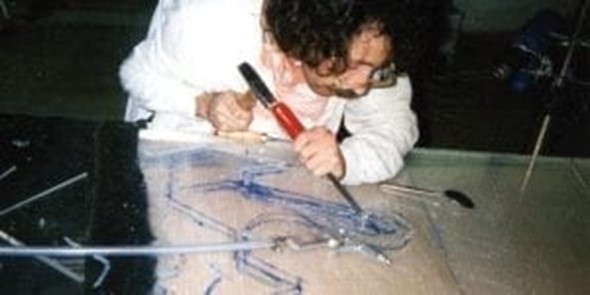 Photo from the archive of PyraSied

More and more, acrylic was also used for injection molding and extruding. The type of acrylic used for this differs to a certain extent from the cast acrylic. Acrylic types for extrusion and injection molding have a lower molecular weight so that they flow better. Very different applications of acrylics, but then hardly polymerized as additives to motor oil, lubricating oils are other applications where viscosity is important. Also of course application as paint and varnishes. Acrylic is also a basic raw material for making certain types of textile. But don’t forget the nail polish! In almost every country, a cast and extruded acrylic company emerged after the Second World War. Such as in France Altuglas and in Italy Setacryl by Madre Perla. Many were small family businesses that served certain sectors. Madre Perla (= mother-of-pearl) mainly made sheets to make buttons, buckles, and combs with a mother-of-pearl effect. There are still many small companies that serve niche markets. And of course, there arespecialists for thick blocks, super-large sizes for the construction of aquariums, specialists who make tubes or profiles or multi-layer sheets or special diffusers for the lighting market.

PyraSied derives its right to exist to a large extent because all those sub-flows come together with us. We know the producers worldwide. We know very well who can do what and for what and from their side the producers know that by working with us they are sure of professionalism and reliability.

For reactions or questions regarding this text, you can mail to sales@pyrasied.nl.